The UBC Drinks Tap Water campaign was launched at UBC Vancouver and UBC Okanagan to help fulfill one of the HBI primary actions:

Create an education and engagement campaign to encourage our community to make healthier beverages choices.

An external campaign site was set up to support the UBC Drinks Tap Water which was a collaborative effort between the Food and Nutrition Committee and Student Housing and Community Services on both campuses. The campaign aimed to support healthier beverage choices by touting the benefits of tap water—it's as safe as bottled water, good for your wallet, good for your health, and good for the planet.

While tap water isn't necessarily good for business (it's free, after all), it is good for people and planet—and that's a priority for UBC, identified in the Wellbeing Strategic Framework. By promoting tap water in lieu of sugar sweetened beverages (or even bottled water) we also support UBC's goals around sustainability by reducing the number of single-use plastics discarded daily, and encouraging our community members to take to the taps with their own reusable bottles.

UBC's campuses are situated in Vancouver (traditional, ancestral, and unceded territory of the Musqueam people) and the Okanagan (territory of the Syilx Okanagan Nation), locations that are known for excellent-quality tap water, and we acknowledge that in many places, a campaign like this would not be possible due to tap water that is not potable.  In fact, much of our campaign messaging focused on celebrating the excellent-quality water on our campuses. 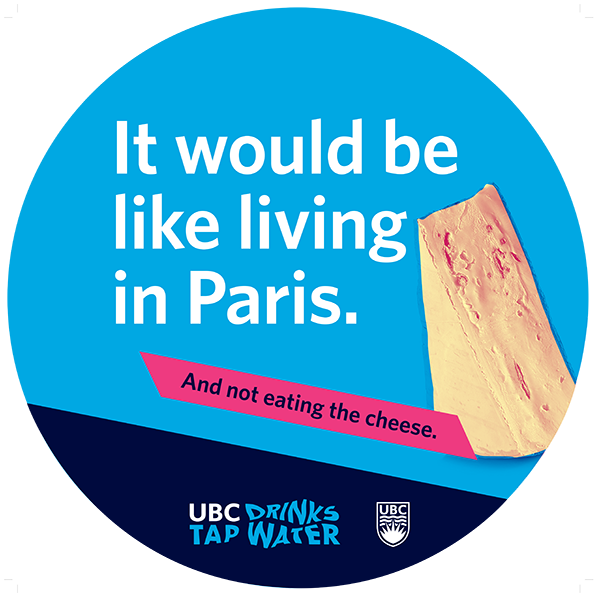 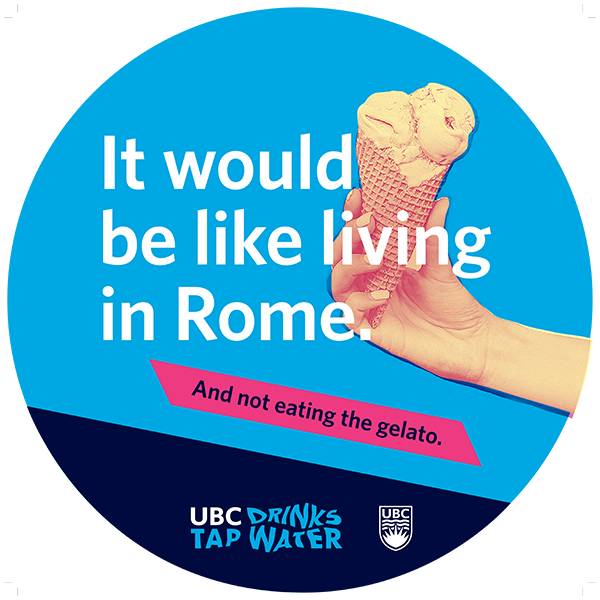 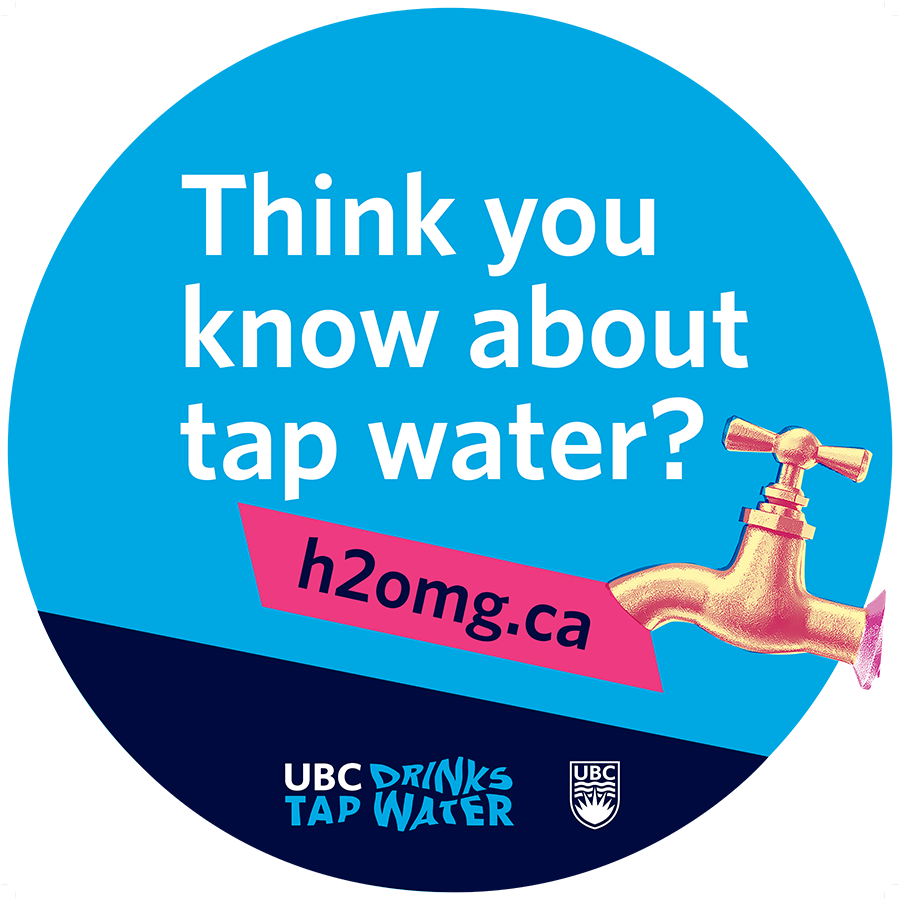 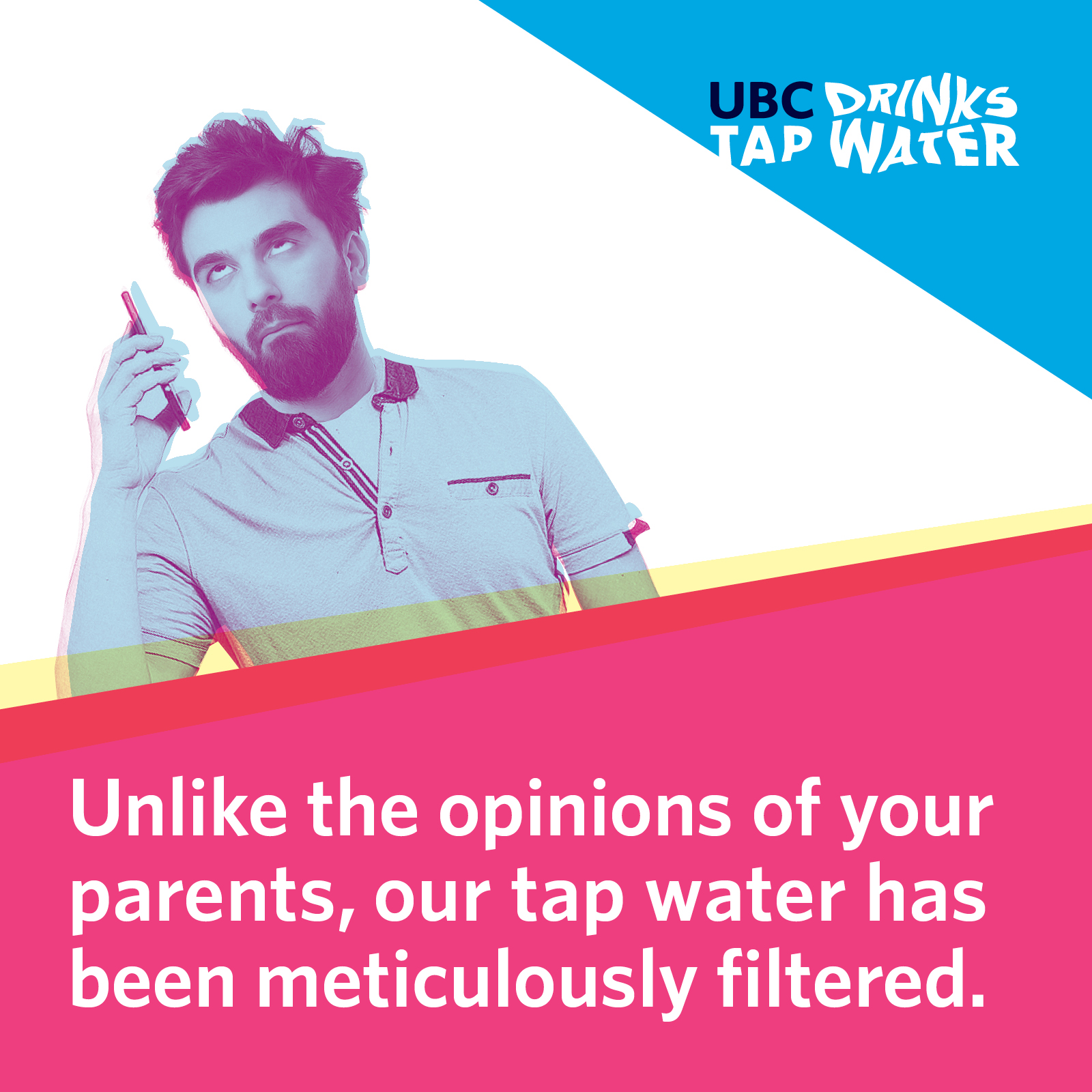 Through in-person activations, we found that a number of community members were not aware that tap water in Vancouver and the Okanagan was safe to consume. This discovery spurred a number of student-led research projects through the SEEDS sustainability program.

The Food and Nutrition Committee was very interested in some of the anecdotal evidence regarding why some people choose not to drink tap water. In some cases, it came down to taste—some people just felt that bottled water tasted better, while others grabbed sugary beverages and bottled water out of convenience.

However, we were surprised by the number of people who told us that they just didn't realize that tap water on our campuses was safe to drink. Given that 53% of those who did not drink tap water before claimed that they were more likely to following the campaign, this presented a great opportunity to dig deeper into how we might convince those loyal bottled-beverage drinkers to take to the tap, especially if they weren't aware that this is a viable option.

With this research question in mind, committee members went to the SEEDS Sustainability Program, which uses student-led research to take a "campus as a living lab" approach to creating societal impacts. Several groups of students have further explored ways UBC can better promote the safety of tap water to specific campus populations in the future.

The present study was a two phased investigation, inspecting the gap in literacy that leads to a preference for bottled water over tap water on the UBC Vancouver Campus. The second phase of this study explored the impact of choice architecture; particularly visual nudges, on diverting this preference. Our findings suggest that a visual nudge employing a pre-commitment strategy was the most effective in increasing self-reported use of tap water. This was followed by a visual nudge employing the ease and convenience technique, which pointed out the closest tap water facility.

We all have a hand in shaping campus environments that support health, wellbeing, and sustainability. By championing wellbeing, we can build stronger and more inclusive communities at UBC and beyond.